DEMO ACCOUNT TRADING "THEN" LIVE ACCOUNT TRADING NOT "VERSUS" There is a very popular/dangerous opinion regarding Demo and Live Trading going around in the Forex Community that will only lead to disastrous results for traders who follow this misguided view. It is the view that since Demo Accounts do not involve real money under "real" market conditions, it cannot adequately prepare you for Live Trading. People who believe this say that you should therefore open a Live Account so that you can get a "feel" for what Live Trading is about and therefore have a better performance. They also add that if you are on a Demo Account, you will not take it seriously and that Live Trading will somehow "force? " you to trade seriously and thus more profitably. Unfortunately, this is very far away from the reality of Forex Trading and life in general. New Traders need to stay away from these types of opinions which will only lead you down a
4 comments
Read more 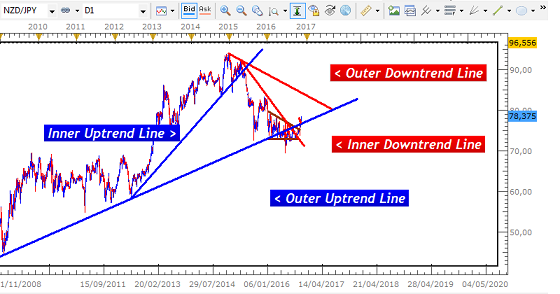 Another great trade was provided by my Methodology to Subscribers towards the end of November. As the NZD JPY broke out of the large Daily Pennant Consolidation, we spotted the Entry Signals on the Daily & 4 Hour Charts that allowed us to capture a large trading gain of 198 Pips within 6 Days. The Charts below show the setup that I had seen on the Daily Chart. As you can see in the first Chart, the we were currently at the Outer Uptrend Line following the temporary Downtrend that broke the Inner Uptrend Line. At this point, the market could either continue its bearish momentum in favour of the Japanese Yen below the Uptrend Line or rally to resume the major Uptrend. Usually when we have these types of situations, the market will spend a lot of time moving sideways to reflect the indecision of the mark et. This often leads to the formation of Consolidations such as the one formed there. After spending a lot of time in this setup, the market eventually reveal
1 comment
Read more

After a long break that I took to fine-tune my Methodology, I´m now back with you to give you my analysis, videos and best of all Great Trade Results! The latest trade provided a 175 Pip gain on the GBP CAD as part of a recent decline. With this latest trade, the Strategy has recovered to be up 38% for the year, following a flat performance in the summer. This decline on the GBP CAD was taking place within a Range Setup that was being formed on the Daily Chart. A pair of Double Tops and a break of the Uptrend Line were the signals indicating the start of the Bearish Move. I then waited until the 4H Chart provided a Setup & Signal to take advantage of the expected downtrend. Since these were deemed strong enough, I decided to trade it. I placed my Stop Loss above the high of the U-Turn and targeted an area where I believed it would head towards before pulling back- how did I know it would pullback there? ( Trade Secret ) Below is the Video Analy
2 comments
Read more
More posts