September 14, 2014
The recent 70-Pip trade made on the AUD NZD highlighted the main challenges faced by the typical Day Traders using the Lower Time Frames. This trade required entry at the Bullish Candle Signal that started a breakout from a Range and a large Pennant Consolidation on the Daily Chart. However, Day Traders would have encountered a more volatile picture on the smaller charts that would have severely limited their profitability during this Bullish breakout.

The charts below show the breakout that started the trend that provided the trading gain. Entry took place immediately at the close of the Bull Candle with the Stop Loss and Profit Targets set according to the rules of the strategy. 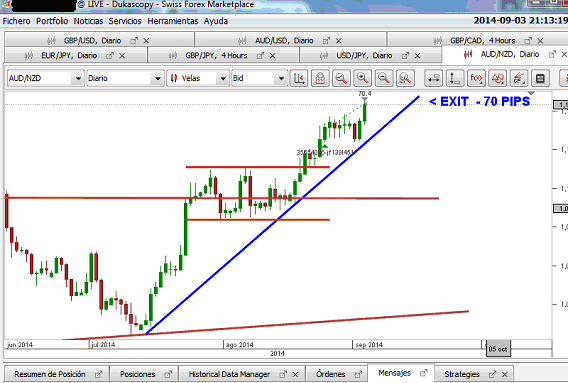 This was a simultaneous breakout from a large Pennant Consolidation and a Range setup at its Resistance.

Many Day Traders would have avoided entry here, however, given the size and volatile nature of the candle. The large wick on that candle would also have suggested the end of the breakout, while the subsequent reversal and sideways pattern limited any possibility of a profitable trade.

Nevertheless, a trading possibility eventually appeared on this time frame in the form of another Consolidation breakout.

Entry could have taken place at the Bullish Candle that broke Resistance with the Stop Loss at the Support area. Unfortunately, the breakout for this would have been limited to only 15 Pips ahead of the reversal a few hours later. For scalpers, this 15-Pip gain would have been a good trade, but for others holding out for more, breaking even or incurring a small loss would have been the result. Yet for others who may have held out in hopes of a turnaround, a total loss on the trade would have been suffered.

Following this period, the currency began to move sideways in a volatile pattern, offering very little in the way of tradeable setups.

Those aiming for small Pips may have been able to scrape out a few more to add on to the 15 Pips. However, the sharp reversals and spikes would have made this a very stressful, losing endeavor. Others aiming for more would also have been left without any opportunity to compensate for the previous losses.

The results from this type of trading over the long-run are often lower than expectations despite the attraction of the smaller charts. The greater volatility and the need to continuously monitor the market at all hours of the day can take their toll on a trader. For Swing Traders on the other hand, only a few hours are spent trading and analyzing the market prior to entry. Instead of aggressively battling a large number of candles at a time, only a few candles stand in the way between entry and profitability.

Trading can be a lot more enjoyable and profitable than what many are led to believe. If this is done using the higher time frames that reward the trader rather than the smaller time frames that reward the broker, long-term gains will be made.  Spikes that come out of no where to take out our Stop Losses and unexplained pullbacks that reduce our profits can all be avoided.

By using my Methodology and emailing the Code at the end of the Manual and you will also benefit from;