September 08, 2014
In sync with the Methodology for trading Consolidation Breakouts, a 70-Pip gain was recently made on the AUD NZD that tested the resolve of Swing Traders. The signal to trade came in the form of a Bull Candle that simultaneously broke the Resistance of a Range and a large 300-Pip Pennant setup formed between January and August this year. However, the breakout was slower than anticipated with a 6-day period of low volatility that would have led most traders to exit early with a smaller gain or a loss. On the other hand, the traders who stuck to the rules of the strategy were rewarded when the pair made a last-minute rally to provide another profitable trade for the year.


The accuracy of the strategy in identifying the correct exit point was confirmed a few days later when the pair pulled back below the Uptrend Line. 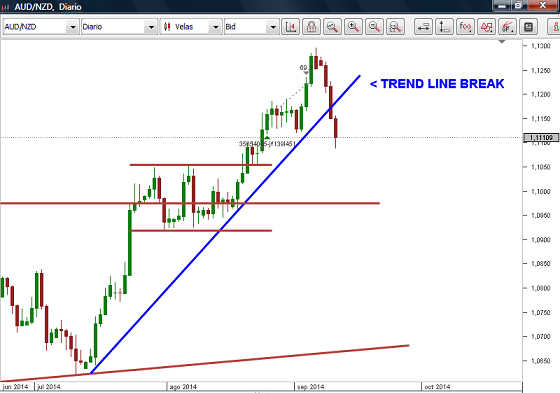 Combined with the results from the other setups provided by the Methodology, the Swing Trader with a US$ 5000 account would so far have realized a 63% gain for 2014. 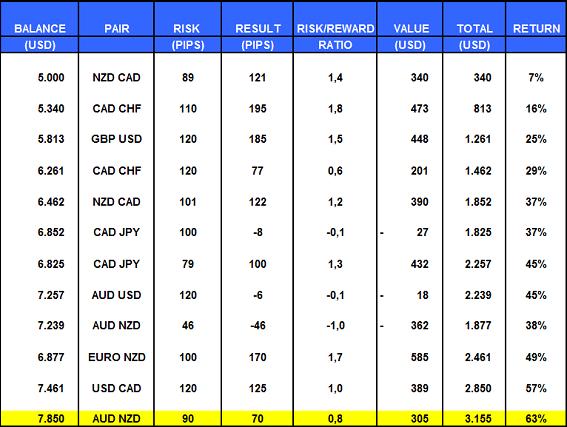 The pair had already broken the Inner Downtrend Line of the previous trend and was expected to eventually start a move towards the Outer Downtrend Line. (FXCM Marketscope is used to obtain Price Action chart signals).

In keeping with the natural cycle of the market, the end of this long Downtrend was followed by the formation of a large Consolidation pattern. A Range setup had also been formed on top of the Resistance of this Pennant which had produced several waves of Uptrends and Downtrends over the last 8 months.

The appearance of these Large Consolidations at the end of trends is also normally the precursor to significant trend changes. With this Range providing a strong setup that could start a breakout and a new trend, we were patiently waiting for the appropriate signal to take advantage of this move. After a few days, this signal was eventually given in the form of a strong Bull Candle.

Given the strength of this signal, the Range and that the Stop Loss was within the limit set for these trades, an entry to go long was executed immediately. The target was set for just below the Breakout Equivalent of the Range (the rule for Consolidation breakouts) with the Stop Loss placed at the appropriate area to protect the trade.

Instead of going to the expected target for a 132-Pip gain, the trade had to be exited early based on established criteria for these trades.

The criteria for trade exits allows us to avoid breakouts that will either not reach the target or become excessively volatile along the way. These same parameters also allow us to stay in trades despite brief periods of low market activity such as the 6 days that  followed entry. Anyone monitoring their trade during this period would have been justifiably tempted to exit the trade for a small gain or loss. However, by sticking to our cardinal rule of this Methodology which prohibits the monitoring of trades, one would have benefited from the Bullish rally on the day that coincided with our early-exit criteria being met.

Trading involves a lot of discipline especially when done on the larger time frames of the Daily and 4 Hour Charts where the trends are slower. By adhering to the rules that identify the highest paying trades, one can consistently reap the rewards of Forex trading while avoiding the pitfalls of unexpected volatility and emotional trading.

Stay on the higher time frames, follow the rules and you can be part of an extraordinary way of making money in this challenging and exciting market. Avoid the volatility and Stop-Hunting that `accidentally` take place on the Lower Time Frames that benefit the brokers.

Use my Methodology, email the Code at the end of the Manual and you will benefit from;