May 27, 2014
The favourite currency pair for traders has been meandering within a Pennant on the Daily Chart for some time and now looks set to start a sharp breakout short. However, with the fairly weak nature of the candles that have broken the Support area, a false breakout to head back long could surprise traders with short positions. If this reversal were to take place, it could mean the start of an even larger breakout long from the major Pennant on the Weekly Chart.

Since the end of the sharp gains for the USD during the period of risk-aversion in 2008, the pair has moved within a large consolidation on the Weekly Chart. Several waves of uptrends and downtrends have taken place over the last 4 1/2 years to form the Pennant we see today. The most recent wave inside this consolidation has now taken it above Resistance, where we find the smaller Pennant of the Daily Chart. 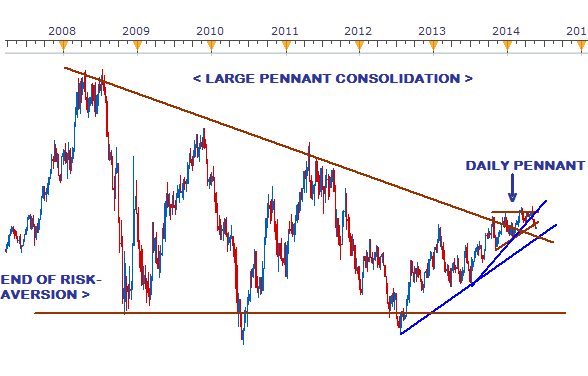 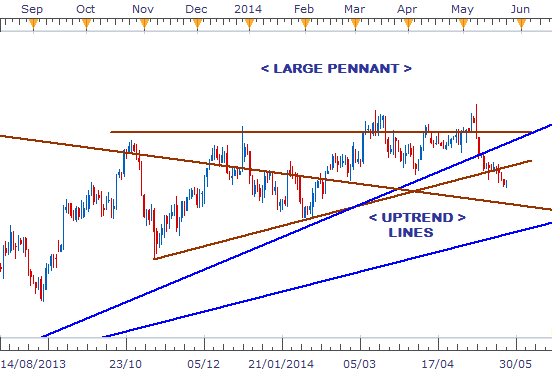 The breakout short from the Daily Chart´s Pennant has taken it between the Inner and Outer Uptrend Lines that have defined the trend direction for this pair. Further moves closer to the Outer Trend Line would confirm the start of the new downtrend. Nevertheless, the break has taken place with weak candles and whenever this happens one of two things is possible. It could mean that there will be a brief pullback to test the broken boundary before resuming the breakout with a stronger signal. If that does not happen, then there could be a sharp reversal long that carries the currency back inside of the consolidation. Another issue to be considered is that the recent bearish move has carried the pair close to its Weekly Range. This value, which is the average price movement over 7-10 days, is 400 Pips for the Euro Usd and this is close to being hit from the high of 1,3980. Pullbacks normally take place when this range is reached and given the weak nature of the candles, we are even more likely to see a bullish move for at least a few days.

The direction taken by the Daily Chart has implications for the longer term outlook for the currency pair. A breakout short to start a new downtrend means that a large drop of over 1,000 Pips will take place by the end of the year. This would carry the pair to just below 1,2500 at the Support of the Weekly Pennant. 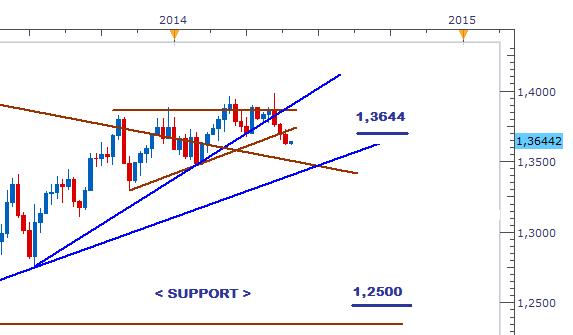 If there is a bullish reversal that leads to a major breakout from the Weekly Pennant, then large gains for the Euro are in store. Since breakouts from consolidation boundaries are normally sharp, the appreciation of the Euro could see it reaching 1,5000 heading into 2015. As that breakout continues, major Resistance areas that formed the boundary of the Pennant would be hit. 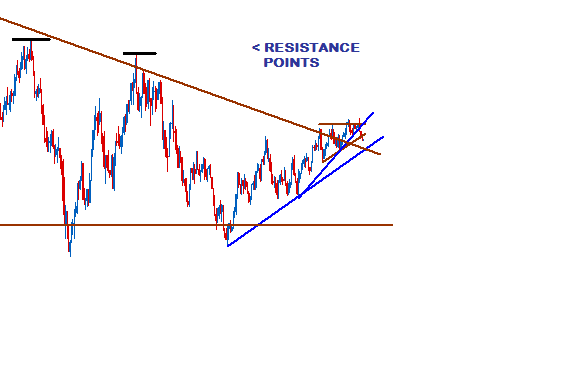 Until a clearer picture emerges on the Daily Chart, we could see a period of sideways movement below the Support of its Pennant. This could take the form of an even smaller Pennant or Range consolidation. A breakout from that setup would give us the new Weekly Range trend for the currency pair and provide a few hundred pips of potential gains.

Let's patiently wait to see what transpires over the next few days.