The popular Candlestick Formation of the Bear Crown has now appeared on the Daily Chart of the AUD CAD, indicating that a new downtrend is on the horizon. The Left and Center Tips were formed several weeks ago while the currency was still in an uptrend, while the Right Tip was formed recently following the break of the uptrend line. 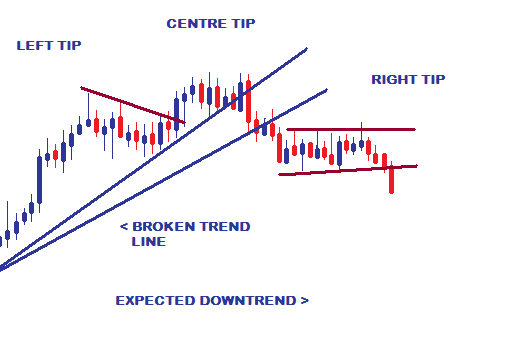 There has now been a bearish breakout candle below the Support of this Range that is providing a potential entry signal to take part in the trend. So what could have led to this setup for a downtrend?

The downtrend on the 4 Hour Chart that led to the Daily Signal, started a few hours after the Reserve Bank of Australia (RBA) kept the cash rate unchanged at 2.5%. Based on the current indicators of domestic economic activity, the RBA believed there was enough stimulus in place to support growth. Nevertheless, decisions to reduce or keep interest rates unchanged tend to have a bearish impact on currencies. The downtrend also took place within the context of a warning by Standard & Poor's, that it would downgrade Australia's AAA credit rating if budget performance did not improve.

Apart from adverse economic news, major trend changes in a currency pair also occur when it has reached or exceeded its Monthly Range. This is the average price movement that a currency pair makes within a 3 to 6 week period. As the market approaches this price point, there is a noticeable slow down that takes place followed by a long period of sideways movement. The currency can then either continue with the existing trend or change direction all together with a convincing, opposing signal.

In the case of the AUD CAD, the Monthly Range is approximately 500 Pips and this was hit on two occasions within the previous uptrend. The first was when it moved from 0,9410 on January 2nd this year to 1,0058 on February 21st and then from 0,9823 on March 3rd to 1,0315 on March 26th. A change in the trend was thus long overdue and a bearish setup for a downtrend was expected. If this downtrend materializes, it would mirror the trend change that took place when the pair rallied by just under 1000 Pips between July 27, 2013 and October 17, 2013. 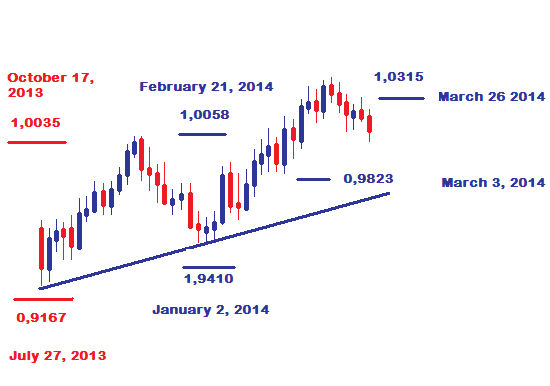 Taking advantage of such a move in the next few days could provide between 100 and 200 Pips. This can be done on the 1 Hour or smaller time frames, but it would be better executed on the 4 Hour Chart which offers stronger stop loss areas. An entry setup could appear within the next 24 hours and the pip target hit between Thursday and Tuesday of the upcoming week.