During the infamous Financial Crisis of 2007-08 and its aftermath, many trading strategies began losing money because of the dramatic increase in market volatility. Methodologies that functioned with very few hiccups before the Crisis, were no longer profitable and could not adjust to the new scenarios that unfolded over subsequent years. Nevertheless, the methodology outlined in the Trading Manual held firm despite the market turbulence experienced during that time.

The methodology uses Price-Action patterns on the Daily & 4 Hour Charts to identify high probability trades that provide between 100 and 200 Pips. The setups that provide these opportunities exist during normal periods of market activity as well as heightened periods of volatility coinciding with safe-haven investment flows.

The European Sovereign Debt Crisis and the 2007-08 Financial Crisis stand out as strong examples of factors that lead to increased volatility. Since the formation of consolidation tends to characterize these market conditions, we can look at examples of how the strategy would have been applied to this type of setup. In each of these examples, explanations of the technical factors that would justify entry and exit are provided.

Consolidation and breakouts from consolidation are typical market patterns seen throughout the currency market. Consolidations are periods of indecision and low market liquidity in which traders are uncertain as to how a currency pair will be affected by a major, underlying economic factor. The larger the consolidation, the more significant is the underlying scenario that is unfolding. Whenever this issue finally comes to light in the form of a single or series of news releases, a sharp breakout at the Support or the Resistance of the consolidation will take place. The direction of this breakout will be in favour of the currency that benefits from the reaction to the news by investors and traders.

The graph below shows the large Pennant consolidation that was formed for the EURO JPY pair between July and August 2011. The Pennant coincided with one of the periods of the European Sovereign Debt Crisis in which  was believed to be on the brink of exiting the eurozone due to its severe fiscal and economic challenges. It was also feared that such an exit would have a ripple effect that led to other countries leaving the  as well. 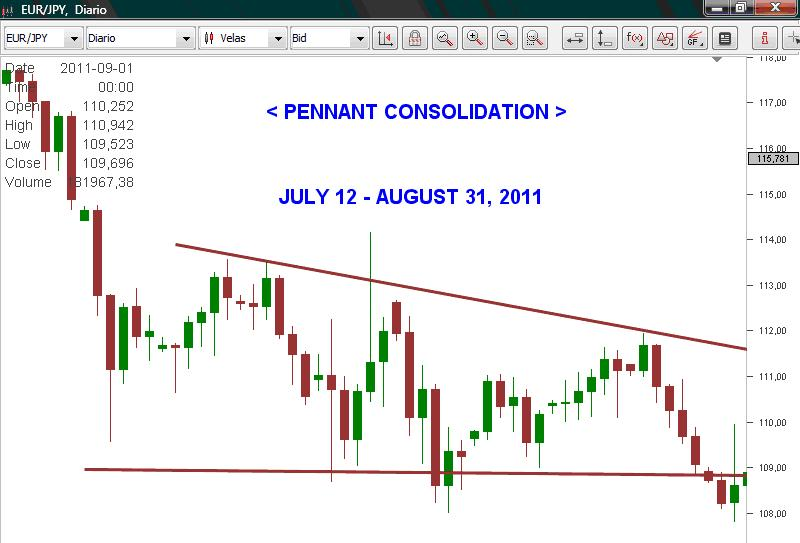 In July, was eventually provided with the assistance it needed to resolve its crisis and prevent contagion among other European countries. However, the market went back into crisis mode in August when European Commission President Jose Manual Barros warned that the Sovereign Debt Crisis was spreading beyond the periphery of the eurozone. Yields on government bonds from and rose sharply as investors demanded larger returns to lend to these countries. As a result, the European Central Bank said it would buy the government bonds of these countries to reduce their borrowing costs, amid concerns that they would be also be hit by a crisis.

Adding fuel to the fire of market uncertainty were developments taking place in the United States- the epicenter of the 2007-08 Financial Crisis. In August, Standard & Poor’s made a landmark decision to downgrade sovereign debt from its prized AAA rating amid a political stalemate over the country’s debt ceiling. Citing a lack of confidence in the country’s ability to reach a political solution, S&P lowered its long-term sovereign credit rating and said it was pessimistic about future decision making. The historic move by S&P reflected the rating agencies’ push to become more proactive than they were during the financial crisis.

Within this context, a breakout short from the Pennant to reflect the selling of Euro and the safe-haven buying of the Japanese Yen was inevitable.  This began on September 8, 2011, with a bearish candle signal on the Daily Chart. 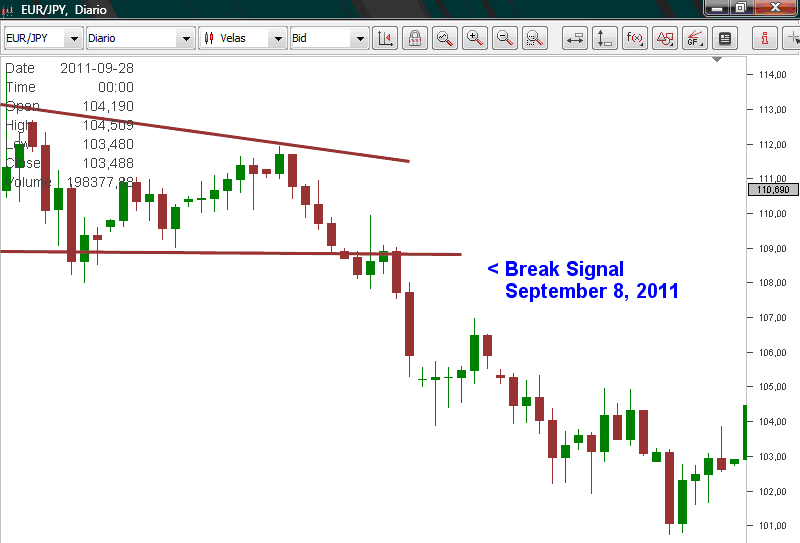 As the currency pair presented this trading opportunity, entry took place immediately, with the target set for 200 Pips as per the methodology. 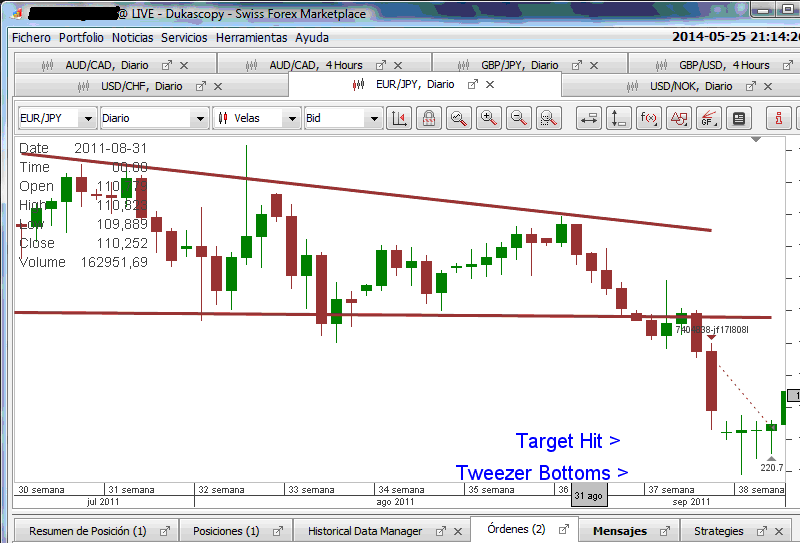 The target was hit after few days for 220 Pips, with slippage taking place to capture a few extra pips. This exit point also coincided with the appearance of Tweezer Bottoms, which are signals that indicate the end of a Breakout.

During this time, a Range had been formed on the Daily Chart of the USD CAD pair that also reflected the pessimistic sentiment of the market.  This Consolidation would also be broken to reflect the safe-haven buying of the US Dollar. 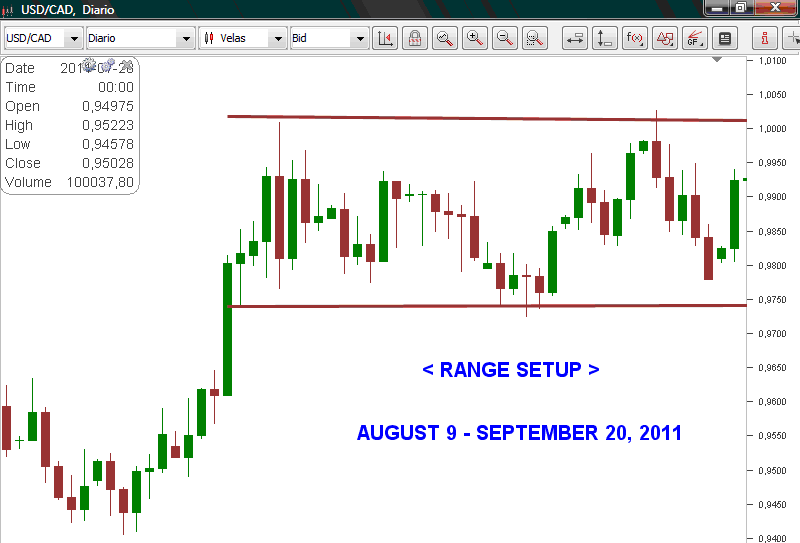 The signal to start the breakout came on September 21, 2011 in the form of a bullish candle breaking Resistance. That signal coincided with statements from the International Monetary Fund in which it forecast slower growth in the and the and warned that the Sovereign debt and banking sector problems in the euro area had proven much more tenacious than expected. 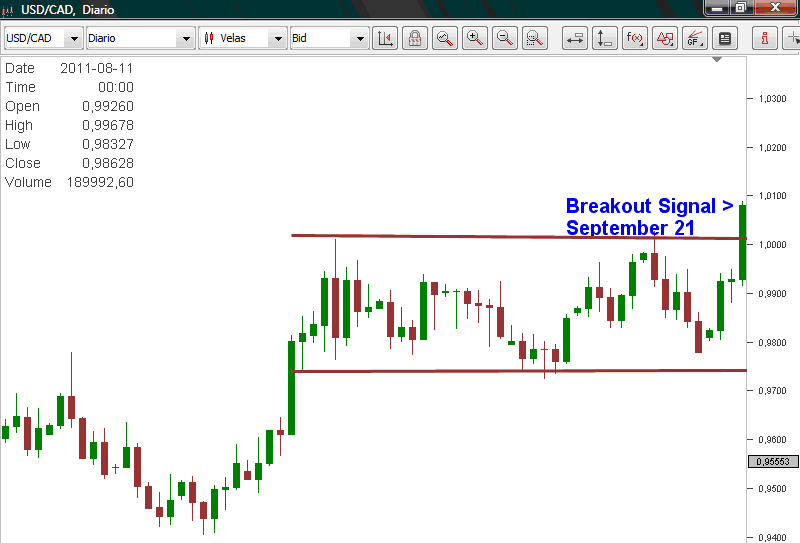 Once again, entry took place on the same day of the signal, with the target of 200 Pips being set. This target was successfully hit a few days later. 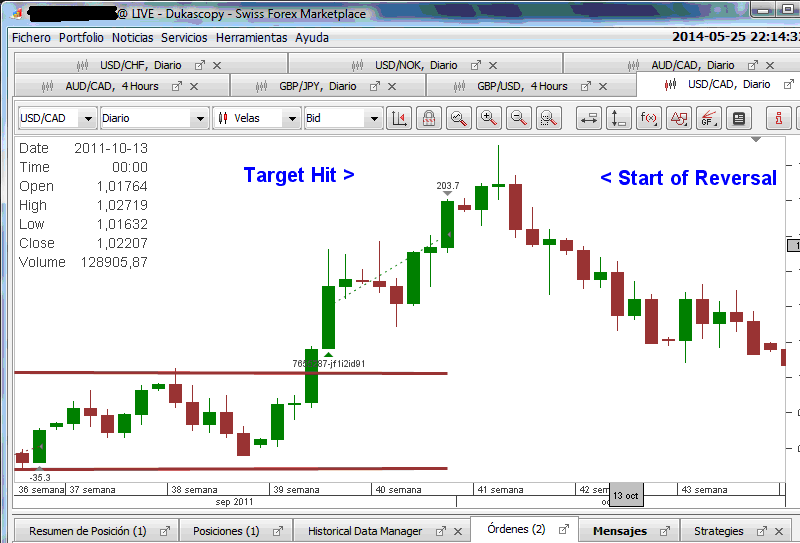 The exit point for this trade took place at the area where consolidations normally end. This area is referred to as the Breakout Equivalent and is a concept that is applied to all consolidation types. Once this is correctly identified - based on certain parameters related to the consolidation in question- exit points for trades can be more confidently established. This allows the trader to be able to avoid the volatility and the pullbacks that normally follow the end of these breakouts.

The 2008 Financial Crisis also provided opportunities that were clear, strong and in sync with the types of setups that are targeted for trading. These setups formed part of the back-testing of the methodology and confirmed its robustness during these tail risk events. Consolidations were also formed during the early stages of the crisis, but these were much larger given the severity of the situation that was unraveling.

Trades can also be executed within Consolidation boundaries instead of waiting until they are broken. To justify trading within these volatile setups, however, the distance between Support and Resistance should at least be 300 Pips. The EURO USD provided such a Consolidation, when it formed a 600-Pip Range between March and August of 2008. 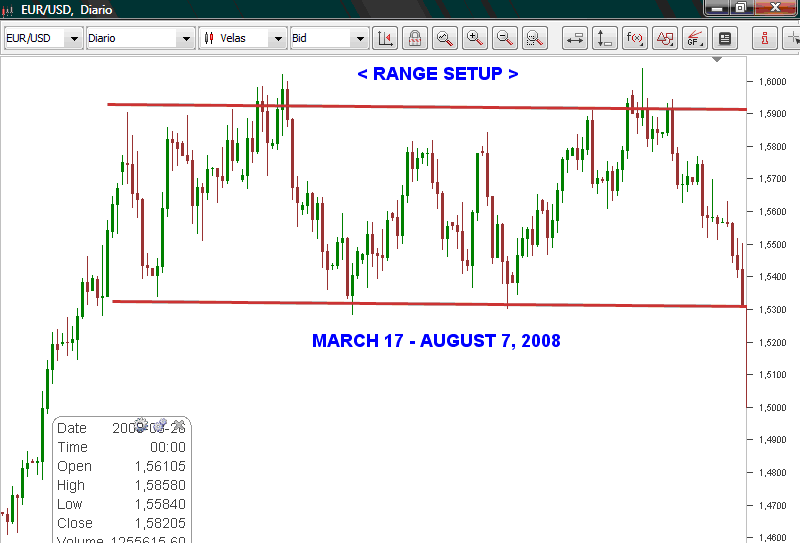 There were several important financial events that took place during this period, that sustained the high level of tension in the market. These included;


Shortly after these events, a Bear Crown Setup appeared on July 29, 2008 at Resistance to signal a move down to Support. This would be the final bearish trend inside the Range, ahead of the breakout short and more aggressive safe-haven buying of the Greenback. 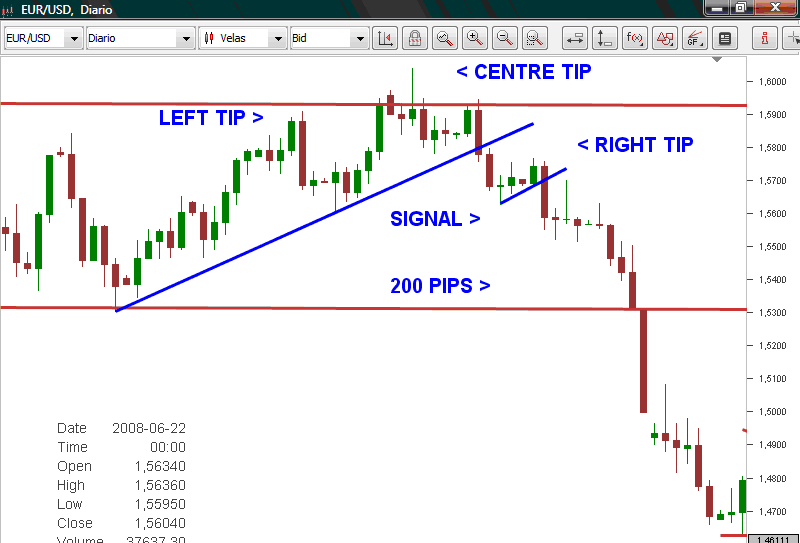 The NZD JPY was already in free fall when it provided an opportunity to continue short in favour of the Yen. A small consolidation in the form of a Pennant was formed and then broken in October 2008. 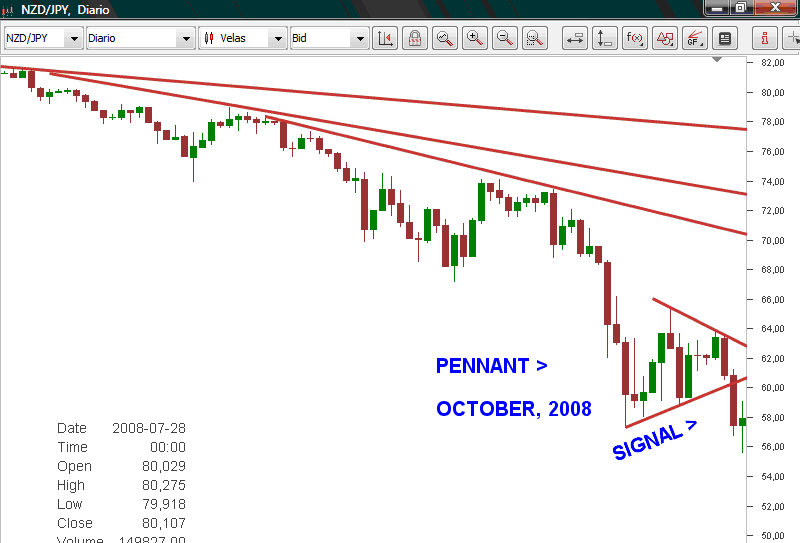 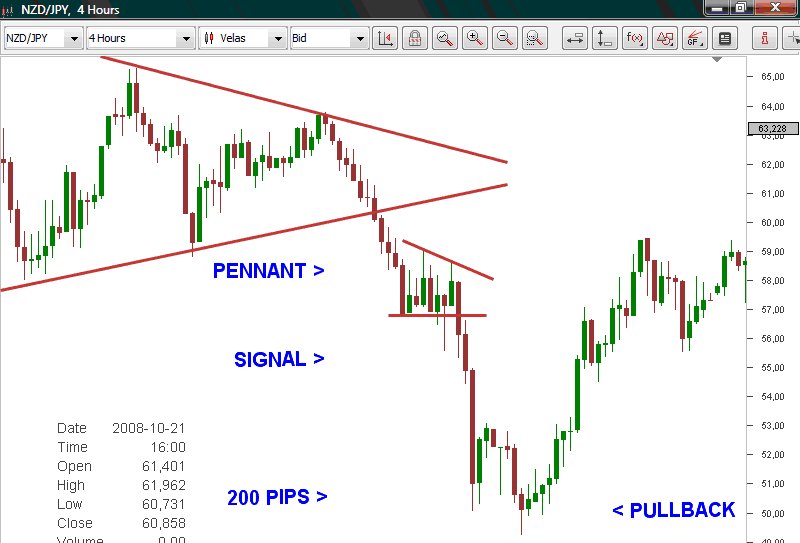 The 200-Pip target would have been hit after only a few hours, just ahead of the Breakout Equivalent of the Daily Chart´s Pennant. Again, this is the area where the breakout from consolidation ends ahead of the expected pullback and reversal.
CONSOLIDATION BREAKOUT

Safe-haven buying of the Swiss Franc was also taking place during the crisis, with the EURO CHF being one of the pairs that reflected these flows. The pair had also formed a large Range before breaking short by 1,500 Pips in just a month.  Prior to the start of the breakout, there was a small Pennant just below the Range that tested the Support before the breakout actually began. 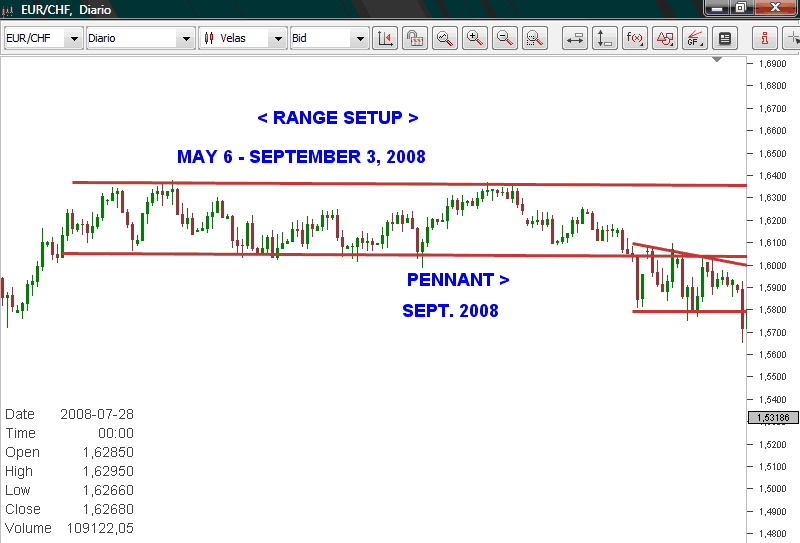 A bearish signal to break the Support of this Pennant was given on the 3rd of October. Entry would have taken place on the 4 Hour Chart since this offered a Stop Loss within the maximum established. 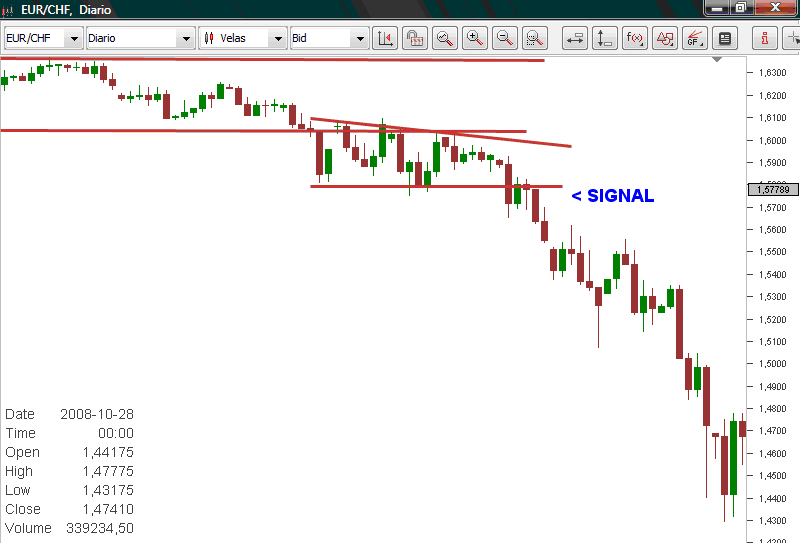 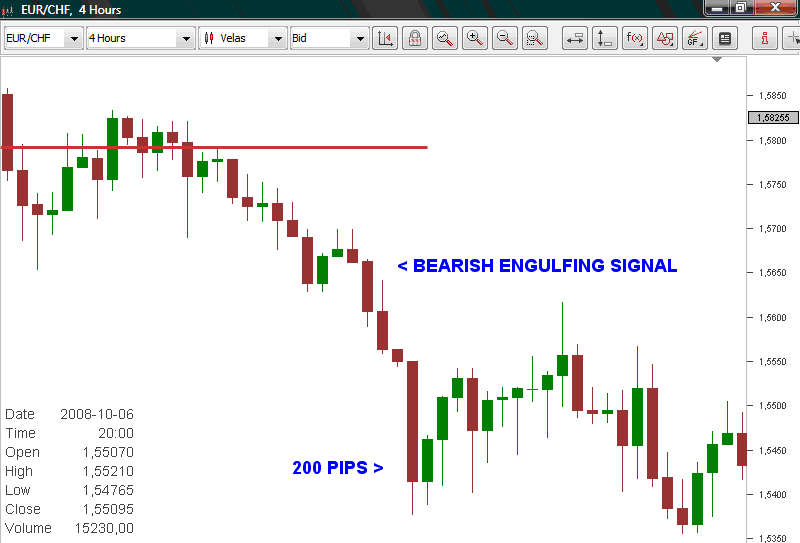 The examples presented here are a mere small sample of the opportunities that have arisen over the last 6 years.  Regardless of the prevailing market conditions, there will always be currency pairs that provide high probability setups that fit the criteria established in the trading strategy. The key is to have the right tools to accurately identify these setups and capture as many of the pips on offer, as often as possible.