The Swing Trading Methodology continues to produce results with the most recent gain of 199 Pips on the GBP CAD. This brings the overall return from the strategy to 22% since it was launched in July, from only 8 trades. As it stands, clients are now only 8 trades away from a return of 100%, which is likely to be reached in the first four months of 2015. The Demo Account, which lags the Live Account by just 3 trades, is now up 17% since it was opened in October.

The Range Consolidation on the Daily Chart of this pair was initially broken short a few days ago, indicating the potential start of a sharp bearish breakout. However, given that the pair had already provided 3-Waves of Bearish Signals in breaking the Support boundary, a bullish pullback was always expected. 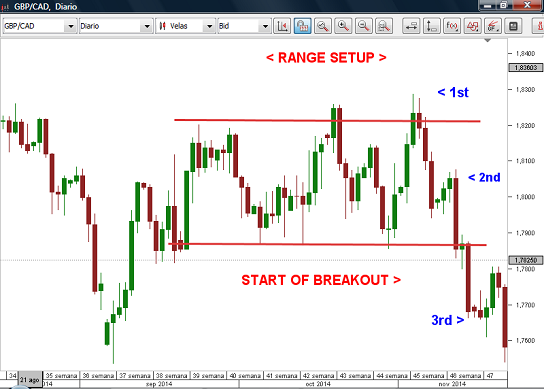 This reversal began a few days later with the appearance of Bullish Signals and a break of the Downtrend Line. 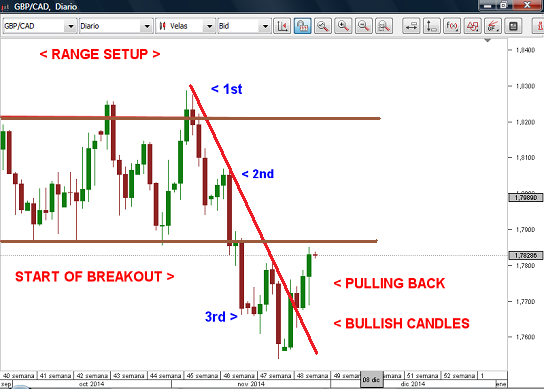 At this juncture, there were two possible scenarios that could have unfolded. The first was for the pair to continue its reversal and break back inside the Range, rallying sharply to the Resistance boundary once more. 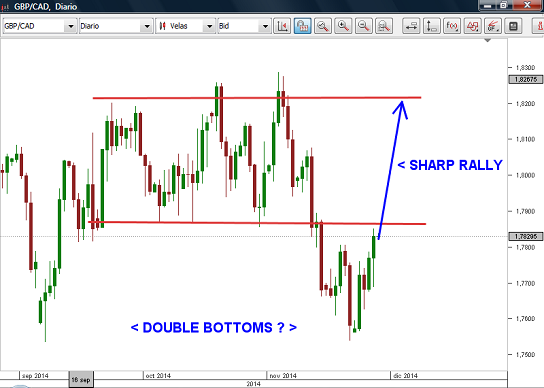 This sharp rally would be typical of what takes place with False Breakouts. Not only would the reversal take the pair quickly to the other end of the Consolidation, they often lead to breakouts at the other end of the setup for even stronger gains for traders. Despite the bullish signals that initially favoured such a move, we also had to consider the bearish scenario as well.

The boundaries of Consolidations are often "tested" for a brief period before resuming the breakout. This "test" often takes the form of a U-Turn or a break of a small Consolidation setup formed at that area. A sharp bearish breakout following such a pullback was also a scenario to be considered. 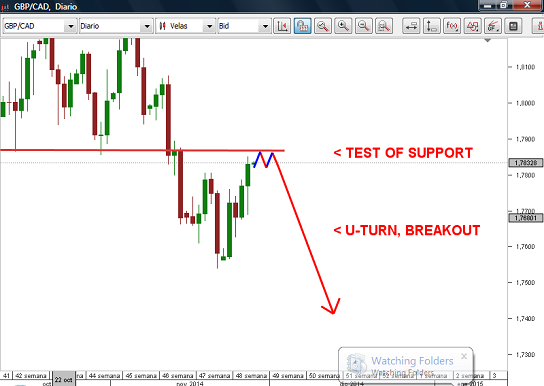 As it turned out, the bullish scenario eventually took precedence as the pair provided an ABC Reversal Signal to continue the False Breakout Reversal. The pair of Double Bottoms below the Range also provided support for the trade.


Given this strong setup and signal, entry then took place on the 4 Hour Chart. The Stop Loss was placed below the Range and the Entry Order set just above its Resistance in expectation of a pullback. This would allow our Stop Loss to comply with the 120-Pip maximum for entries based on the Daily Chart.

This was the Entry Trade Sheet as sent to my Subscribers;


After pulling back to test the Resistance of the Range our Entry Order was triggered. Following the U-Turn to resume the breakout, the target was hit a few days later. 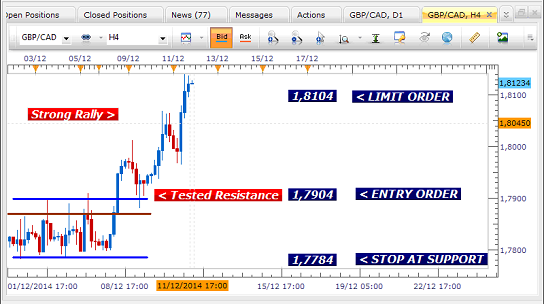 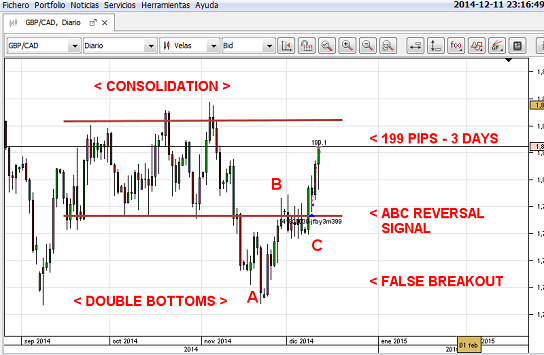 This movement to our target was very fast. Given that we had the combination of the Double Bottoms, a False Breakout Setup and the ABC Signal - which individually always lead to sharp movements - the short duration of the trade was not a surprise.

The main Technical factors involved in this trade were;

Placing this trade in a larger context, the Methodology has now produced a 22% Rate of Return since it started in July of this year. Only 8 trades have been made so far with a simplistic assumption that will be no further losses, clients are only a handful of trades away from realizing a 100% return. 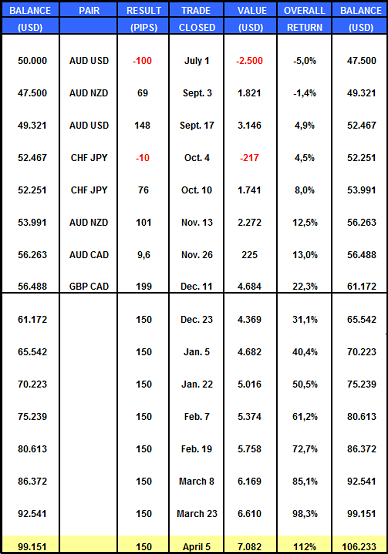 These projections assume that each of the next trades will provide a 150 Pip value, which is the average of our 100 to 200 Pip target range. An FXCM Demo Account was opened on October 1, 2014 to track these trades and is now up 17% after 5 trades. This account would also only require 8 trades for the 100% target. 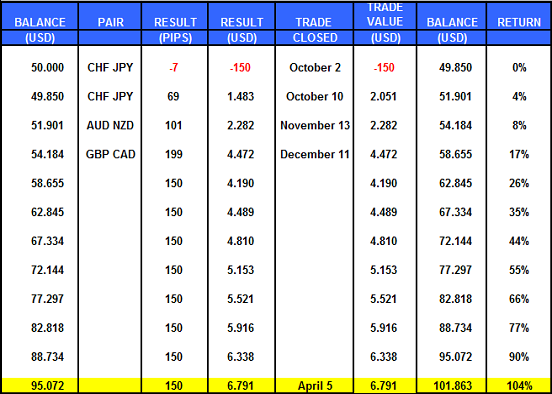 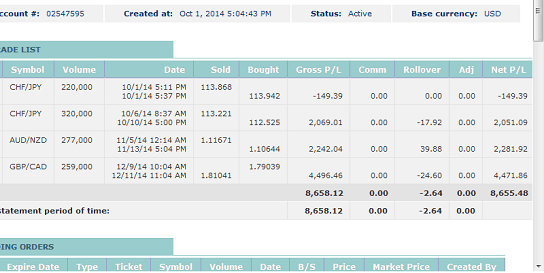 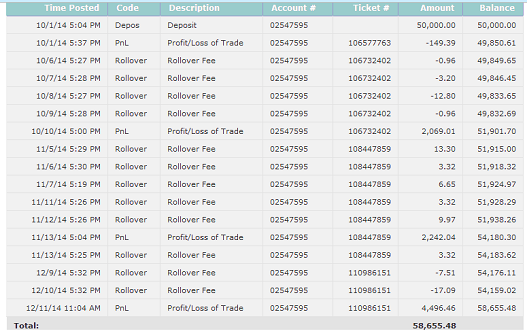 When these results are compared with the Year-To-Date returns as at September 30, 2014 of the Top 10 Currency Traders as ranked by BarclayHedge... 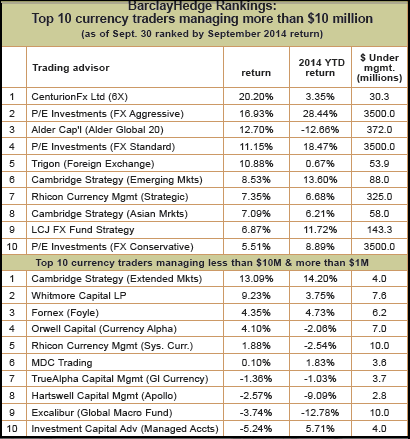 ....the Methodology so far, appears to be able to hold its own.

Naturally, for reasons of privacy, I only share the results of individual trades on my Live Account without showing my actual Trading Account. However, since this Demo Account is only behind by 3 trades and is audited by the trade verification services of MyfxBook, you can be assured of the integrity of the information you see here.


The style of trading that has produced these results is both conservative and high-paying. Trading is only done 1 to 2 times per month, minimizing the exposure of your capital to the volatility of the market. When trading is conducted, however, only the highest paying Swing Trading opportunities that have the largest probability of success are targeted.