SURPRISING TRADING LOSS ON THE EURO CAD DURING "FRANCOGEDDON"

Following a strong start to the year with the 231 Pip-gain on the NZD CHF (see Recent Trades), an unexpected trading loss was suffered on the EURO CAD of 130 Pips last week. The expectation was for the pair to have rallied to the Resistance of its Range Setup after a strong Bullish Candle at Support. However, after a very short time, the trade was taken out by sharp, bearish reversal candles. Although this result pushed the overall return from the Methodology down to 40% after 11 trades, we are still within striking distance of the targeted 50% and 100% Rates of Return.


RATE OF RETURN FROM METHODOLOGY 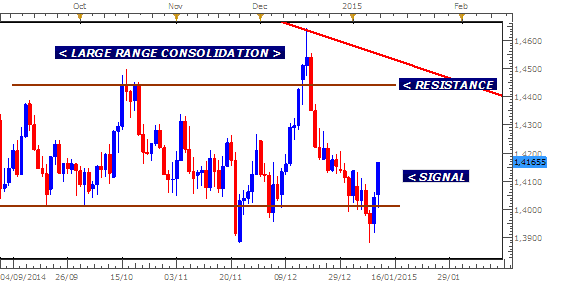 With the setup on the 4 Hour Chart conforming to the criteria needed, (Section 9 - Consolidation Trading on the Forex Market), the decision to trade was taken.

An Entry Order was used instead of an immediate Market Order at the close of the Daily Candle. This was done so that our Maximum Stop Loss criterion of 120 Pips for entries based on the Daily Chart signal would have been met (Market Order required a 160 Pip Stop Loss). 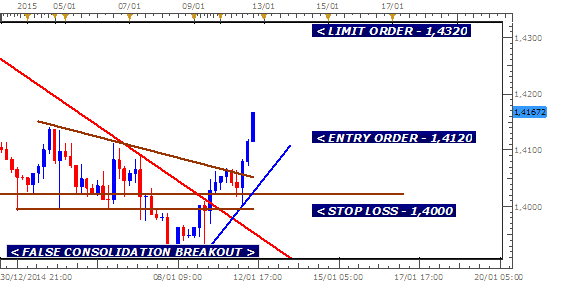 The Stop Loss was placed below the Support of the Pennant that led to the Daily Chart Signal. Despite my high hopes for another strong 200-Pip trading gain that would have pushed the Rate of Return above the 50% mark (and an increase in my Subscription rates!), this was not to be.

Instead, the market reversed sharply bearish to take out the trade after very little bullish movement. 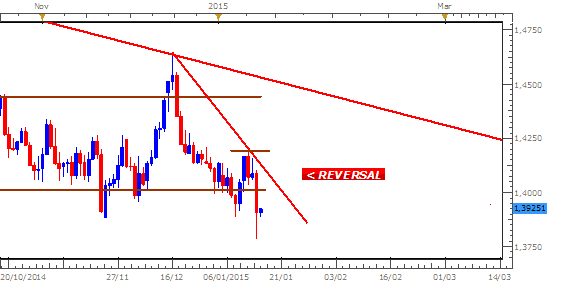 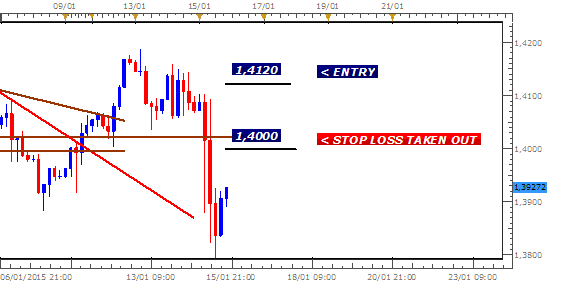 Slippage was the main culprit for this loss being 130 Pips instead of the Maximum of 120 Pips that was set.

This slippage-and perhaps the loss itself - was possibly due to the volatility related to the decision of the Swiss National Bank (SNB) to abandon the EURO CHF 1.20 Cap. As you can see in the charts below, the reversal of the EURO CAD began at the same time as the start of the unprecedented decline in the EURO CHF. 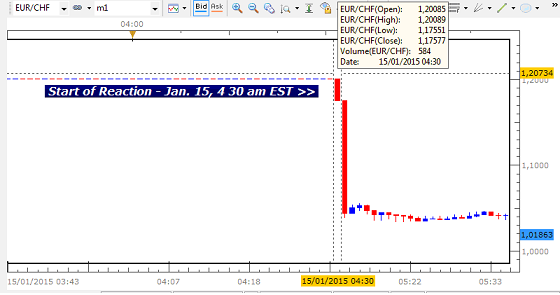 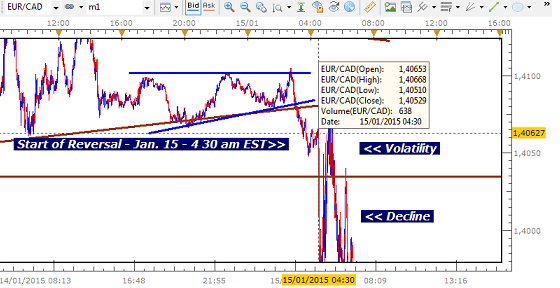 If, however, the removable of the Cap on the EURO CHF had nothing to do with the trade- and its relationship with the EURO CAD and CAD CHF- then the loss was simply just that - a loss. It may just have been one of those trades that cannot be predicted/accurately traded within the parameters of the Methodology - the Error Term (Ɛ) or Unknown Variable (µ) often seen in Regression formulas...

Assuming that there will continue to be more successful trades than losing ones, however, it is now simply a matter of continuing to apply it to subsequent trades- with Patience and Confidence.