June 09, 2014
The rally in the Euro against the American Dollar came as a bit of a surprise on Thursday, given the direct relationship between currency demand and domestic interest rates. The increase followed a brief and expected decline after the European Central Bank (ECB) cut its main lending rate to 0.15% and reduced the rate on bank deposits to -0.1%. However, the very low level of interest rates has led to an increased demand for riskier assets and higher-yielding bonds throughout the region.

With international investors seeking to benefit from the expected rise in the prices of these asset classes, the Euro ended the day stronger to eclipse the initial bearish reaction. Despite this being an important factor in the strength of the currency, however, the net gain on the day was due in large part to a major technical factor at work in the Forex market, known as the Weekly Range.

All currency pairs in the Forex market tend to move in waves of uptrends and downtrends with periods of consolidation in between. The recent sharp decline of the EURO USD before the interest rate reaction ended another one of these downtrends, as it moved from a high of 1,4000 on May 8, to settle at 1,3600 before the ECB rate cut. 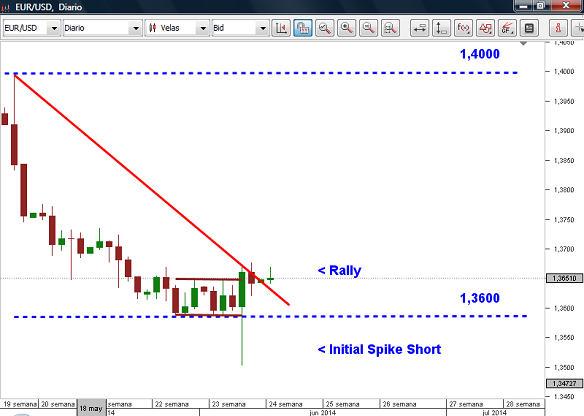 This decline followed the formation of a pair of Double Tops at the Resistance of a large Pennant, that led to the break of its Support at 1,3686 on May 21. 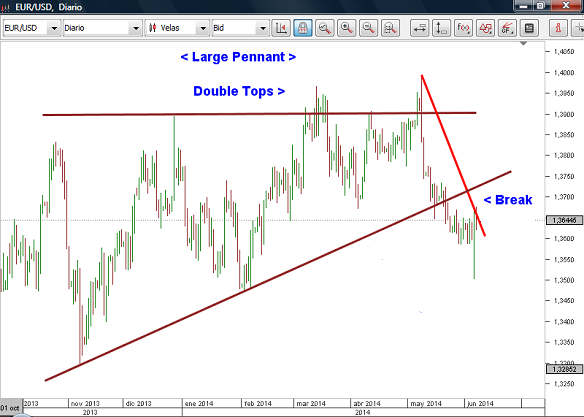 The speed of this downtrend combined with the breakout from the Pennant, suggests that strong gains for the Greenback are expected this year. This could take place despite the pause and the rally related to the ECB rate decision. However, based on the Weekly Range rule as applied to the EURO USD, the interruption of this downtrend was always expected by currency traders familiar with this rule.

The trends experienced by the EURO USD are governed by ranges of 400 Pips. Whenever the currency pair reaches the limit of this range, there is either a brief pause and pullback or a complete reversal of the trend. This also takes place regardless of any short-term news released to the market, but can be accelerated if there is a sharp reaction by traders to such news items. A few examples will serve to illustrate this.

Prior to the start of the formation of the Pennant, there were two waves of Weekly Range uptrends that occurred between September and October 2013. At the end of the first wave, there was a period of sideways movement in the form of a range that gave way to a breakout long. This then led to the start of the second wave which eventually ended with a reversal and break of the Uptrend Line. 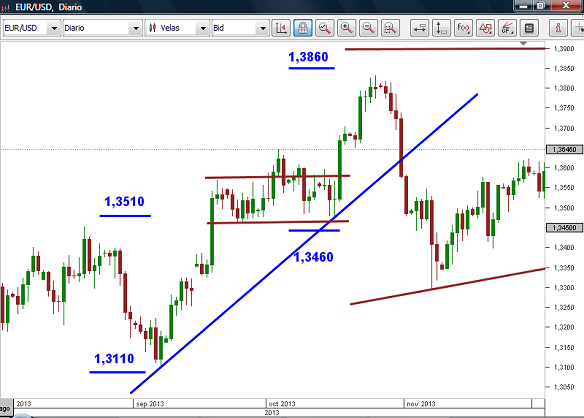 This market phenomenon was also evident earlier in that year, with 2 previous waves taking place between July and the end of September. The start and end of the first wave took place on July 22, coinciding with the aggressive demand for the Euro following the release of the latest minutes of the US Federal Open Market Committee. A few days later, the other wave began and lasted a few weeks before ending with a break of the Uptrend Line. 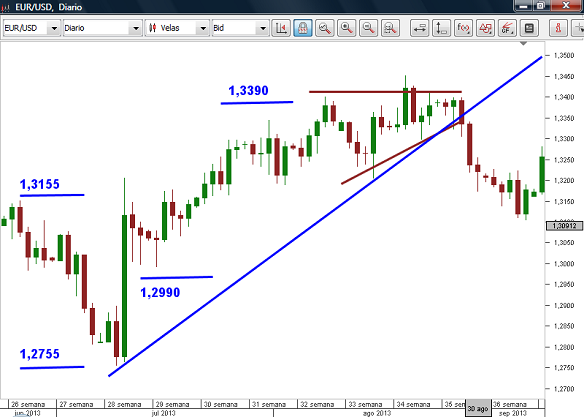 Yet another set of examples occurred at the start of that year, when the first trend began on January 10. After reaching its limit only three days later, the currency pair entered a period of consolidation before resuming the uptrend with another Weekly Range. After this 2nd wave ended, the Uptrend Line was finally broken to start this process all over again in a new direction. 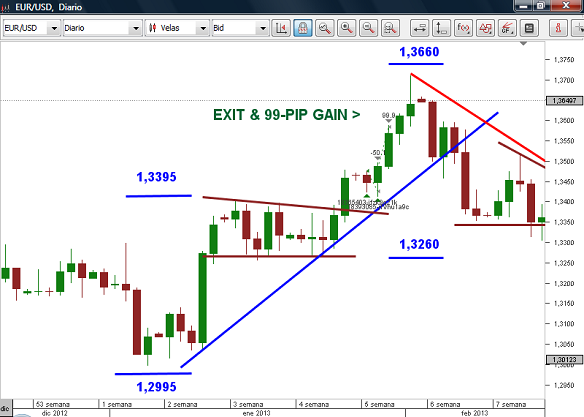 Many other examples of these Weekly Range patterns abound throughout the history of the EURO USD. Knowledge of these waves helps to identify upcoming trend changes as well as to pinpoint exit points for trades such as in the example above and with the EURO AUD and the GBP JPY in the charts below. 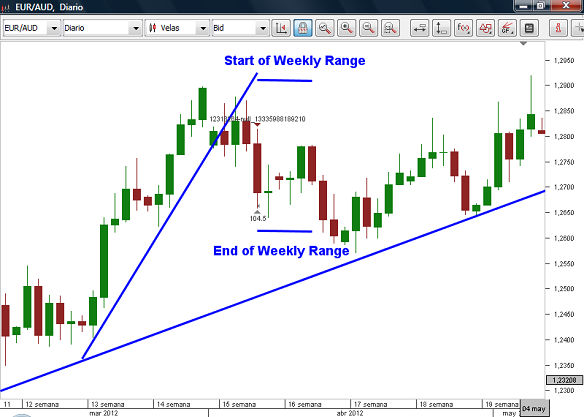 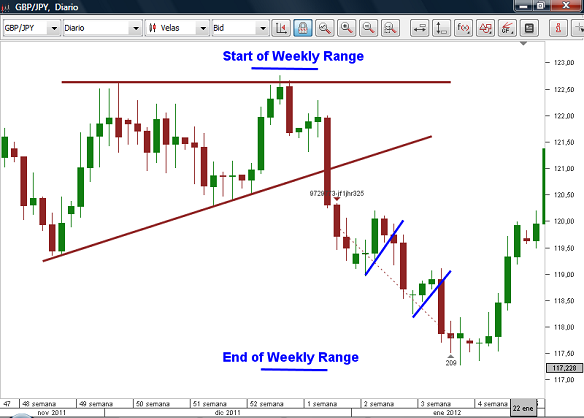 
It can be a fairly straightforward process to spot and take advantage of the start of a trend. However, the challenge for traders has always been to balance the desire for gains with the need to obey the natural laws of the market.

Now, assuming that this rule can be confidently stated as being a necessary condition to spot important exit points, can it also be deemed to be a sufficient condition? Are there any other factors that go into the trade decision that helps to avoid the trap of greed and unexpected, frustrating reversals?

In these and several other examples across the market, one will notice that some trends can take as little as a day to hit their targets, with others requiring as much as a month. For the Swing traders who use the Daily Chart and the Weekly Range to capture their pip targets, should they hold out for this target regardless of how long it takes? The answer to this question is no.

Trading successfully requires the strict adherence to rules of Entry, Stop Losses and Limit Orders. The time that is allocated to a trade must also be objectively determined in order to avoid emotional, incorrect decisions. One should always have the option of exiting a position for a small gain to allow another profitable opportunity on another currency to be traded. But what would this objective time period be and is it consistently applicable to the EURO USD and other currency pairs?

There is only one way to find out.